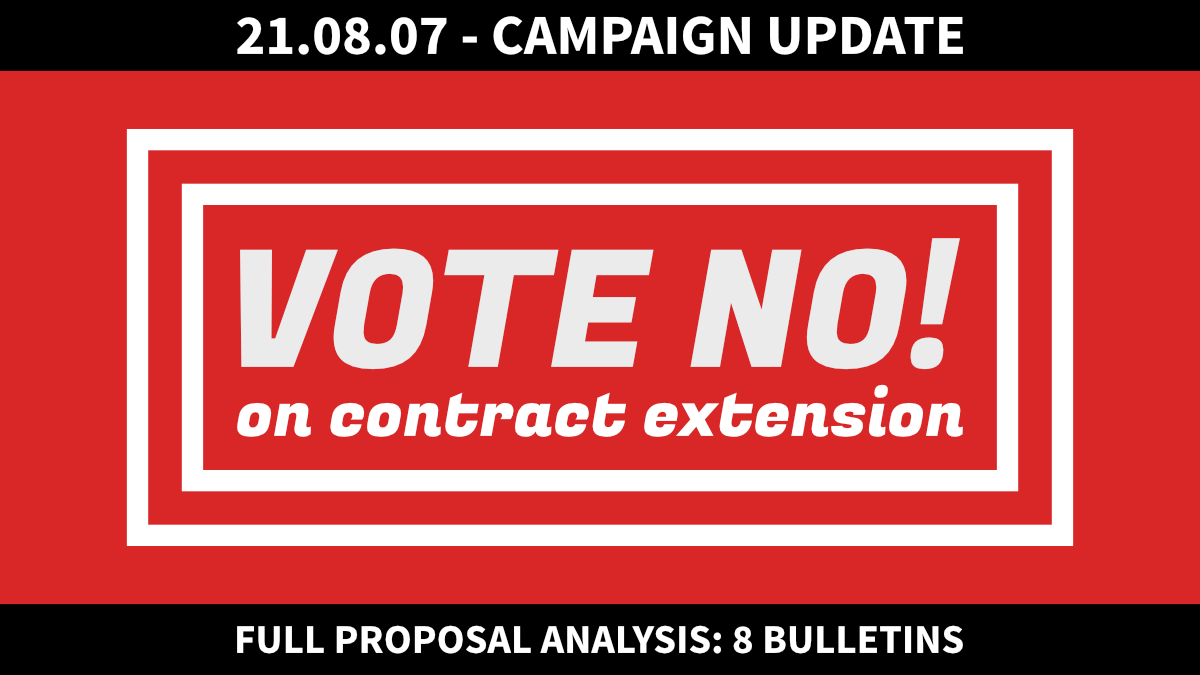 In addition to our jobs and other union responsibilities, coordinators from across the country have been working tirelessly to develop constructive, measured analysis as to why members should consider voting 'No!' on the proposed contract extension. The outcome of this vote will have huge ramifications for the future of our careers and how our union operates. During the last extension vote in 2016, less than 25% of our membership bothered to participate. A turnout this low is dangerous because it shows CPC just how disconnected our members are from the union and how little resistance it will receive the next time they try to attack us. In an effort to motivate and rally our members, the 'No!' campaign has created a series of comprehensive bulletins covering every section of the extension proposal. Accompanying each section are examples of the demands already passed at various Regional conferences we could fight for in negotiations if our 'No!' side wins this vote. Please downloaded, print, and share freely and widely on your workfloors! An informed and engaged membership is the greatest weapon we have against bosses and governments that would harm us.

NO STRUGGLE, NO VICTORY!

The contract extension proposal unanimously endorsed by our National Executive Board (NEB) undermines the collective authority and power of our membership, and fails to address the many wounds inflicted on postal workers over the decades. To reclaim our dignity and fight for the demands we deserve, we must first vote ‘No!’ to this proposal.

At no point did our members direct the NEB to extend the current imposed contract or to engage in negotiations with Canada Post Corporation (CPC) without our program of demands. By ignoring our constitutionally outlined democratic process and all the time and money delegates spent in the process debating demands, the NEB is signaling it knows better than the membership what our priorities are. Even if this choice was made with the best of intentions it displays a fundamental misunderstanding of what makes a union powerful -- the will of our membership, not the abilities of individual negotiators.

Demanding Better
The core demands formulated by our membership are clear: RSMC and Urban units should be merged, the two-tier wage system should be abolished, work restructures should be subject to CUPW approval, SSD should be stopped and reversed, and wages and benefits should always scale with inflation. Of greatest concern, our members want a postal bank staffed by CUPW members, not big banks being subsidized by CPC to use our infrastructure for their own gain. Once a big private bank entrenches itself, it becomes another substantial obstacle in the way of public postal banking, not a step towards it. None of our core demands are properly realized in this proposal, never mind the countless other supplementary demands.

Rejecting this proposal gives us until at least Spring 2022 before negotiations potentially escalate into job action. This is more than enough time for locals to build direct bridges to one another to properly organize our members, together. The NEB’s proposal is disheartening but it provides dissatisfied members a tremendous opportunity to assert our expectations and demands. Vote ‘No!’ to reaffirm our membership as the ultimate authority of CUPW! Vote ‘No!’ to show CPC our dignity cannot be bought! Vote ‘No!’ to embrace a grassroots campaign to fight forward for our demands!

(#1) Wages: Working More to Make Less
The contract extension proposals include a 2% pay increase for each of the two years of their duration. Our past wage increases have not kept up with the cost of living. Trips to the grocery store cost more every year. Where many of us work, housing is increasingly unaffordable. Childcare costs are outrageous in nearly every province. Fuel and utility costs continue to rise. We need more than 2%. Read more >>

(#2) RSMCs: Still Waiting For Equality
The bargaining demand to merge the RSMC and Urban units passed by delegates at almost every Regional conference is reason enough to reject the NEB’s proposal. Extending this contract guarantees RSMCs will be treated like second-class members in this union for another two years. They will do the same work as their Urban comrades but without the same wages or protections. Read more>>

(#3) Group 1: False Staffing Promises
We need more for Group 1 workers than increased access to corporate records if we want to improve the staffing situations in our plants. This proposal will not help us achieve this. Instead, we will be inundated with more partial information which CPC will dispute when we present a case for more jobs. This leaves us waiting for the grievance process to come up short months later. Read more >>

(#4) Group 2: The End As We Know It
If accepted, this extension leaves long-standing letter carrier concerns like the two-bundle system, conversion to Separate Sort from Delivery (SSD), and overburdening, unresolved. Read more >>

(#5) Groups 3 & 4: No Satisfaction
While the extension of the collective agreement offers training on the repair and maintenance of CPC’s yet-to-exist, non-guaranteed, electric and hybrid vehicle fleet, it does little to address the most pressing issues we face. Read more >>

(#6) Postal Banking: Public Service Vs. Private
Our members voted for a public postal bank staffed by CUPW members, not to subsidize big banks to use our infrastructure for their benefit after they abandoned rural communities. This development will make it harder to establish a postal bank, not easier. Read more >>

(#7) A Referendum On What A Union Should Be
Our leverage as workers comes from our collective power; together, we can achieve anything. When a few executives from CPC are able to approach a few people from our national office to arrange a deal this extensive, without our input, the collective strength we have as workers is critically undermined. Voting ‘No!’ to the NEB’s extension recommendation is a vote to return to membership-driven collective bargaining, which means using contract demands brought forward by all CUPW members, regardless of union rank. Read more >>

Volunteer For The 'No!' Campaign
The 'No!' campaign is run completely by volunteers. Where the NEB has access to a full membership list and hundreds of thousands of dollars of our dues money to promote their perspective, we only have what we've donated from from our own pockets, social media and our network of workfloor activists to rely on. If we are to win this vote, it will be because members like you are fed up with your job getting worse and will use this vote as an opportunity to inspire your co-workers to send a message that it is never a bad time to fight to improve our jobs and lives.

1. Contact our campaign coordinators if you have any ideas or talents to help us rally the vote!
2. Like, share, and (respectfully) engage with our material on social media!
3. Download and print any of the pdf bulletins provided (above) and distribute them on your workfloor!

VOTE ‘NO!’ TO FIGHT FORWARD FOR OUR DEMANDS!